Saving energy and driving down energy bills is a key aim, not just for UK households, but also the Government. With targets to meet it’s calling on scientists to look at how we can reduce our carbon footprint more effectively.

The Salford Energy House, created and managed by Salford University, is one such important experiment that is being supported by the UK Government. It is a real house that has become a testbed for studying and analysing energy consumption. You may have seen it in the news as it has generated a lot of press coverage. 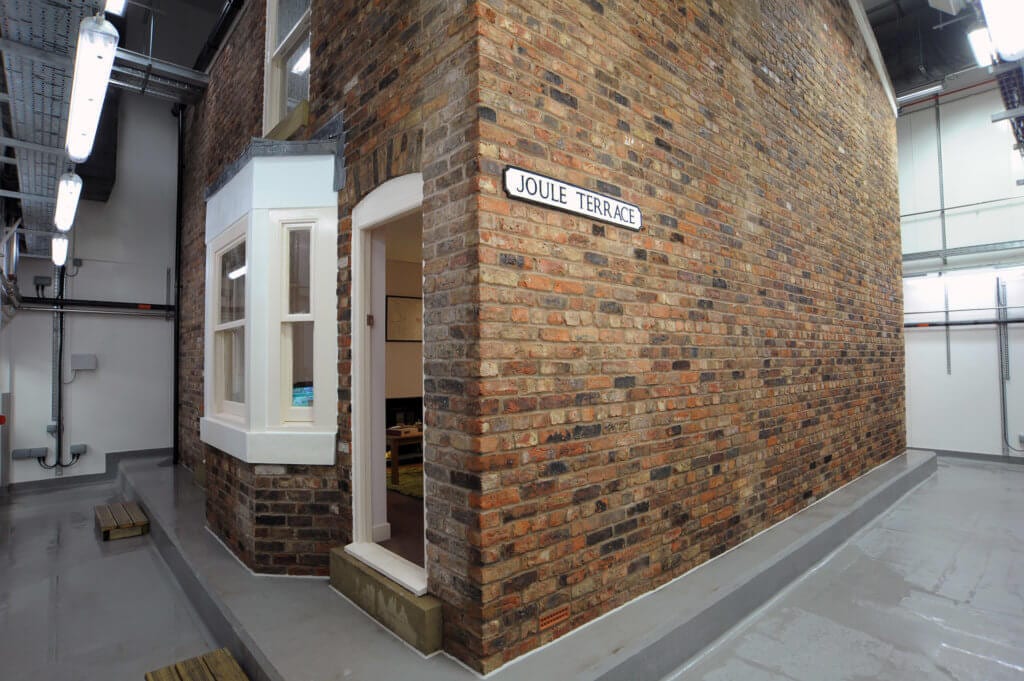 The aim of the house is to look at how UK households can make their homes greener and reduce energy, as well as ensuring bills are cheaper, but all the while keeping it warm and comfortable to meet 21st Century expectations.

The Salford house is a typical Victorian, end-of-terrace two-bedroom property that you can find in towns all over the UK.  It’s a fully functioning property with a central heating system and running water.  It has a kitchen with appliances including a fridge and a bathroom – both with running water.

As the University is trying to recreate a normal ‘working’ house in order to understand more about domestic energy consumption, it’s crucial to have the elements and utilities replicating real life.

Just to add that extra dose of reality, the house is located inside an environmental chamber where scientists can freeze, heat or soak the house to simulate rainfall, cold or hot weather.

In order to test energy savings on our smart radiator thermostat, Radbot has undergone a series of tests within the house.

For the Radbot team, being able to measure energy-savings achieved by Radbot is extremely important. A lot of smart heating solutions talk about saving money and reducing heating bills, but what’s the truth?

As we also don’t believe in doing things in half-measures, we felt that by having the product tested and reviewed in a controlled, scientific environment would really make sure we put Radbot to work.

Just as you would fit them in a ‘real’ home on real radiators, Radbot was fitted throughout the Salford house and then monitored over two testing periods or phases; the first phase being 21 days and the second, 16 days. The heating system used was a traditional wet heating system, which consists of a boiler and radiators.

In order to benchmark the effectiveness of Radbot, testing was done alongside traditional, or ‘non-smart’ thermostatic radiator valves or TRVs, and the environment chamber weather was set to simulate mid-January weather in Salford, with Sunrise at 8.13am and Sunset at 16.28pm.

When we buy or sell a property, we need to provide an Energy Performance Certificate (EPC) that informs potential buyers of how energy-efficient the property may or may not be. The Salford house has an EPC Band D rating.

To give a bit of context, Band A is the top rating. Band D is about standard for a property of that age and style as Victorian houses, and older properties in general, can be prone to leaking heat or being under-insulated.  This is another reason the University chose this style of property for the experiment.

EPC ratings are formed from the Government’s Standard Assessment Procedure (SAP), which is a methodology used to assess and compare the energy and environmental performance of dwellings.

Radbot was also tested with SAP heating guidelines in mind, which recommends room heat settings are fixed at the following temperatures:

With all the conditions set, Radbot was put to the test alongside ‘non-smart’ TRVs, in an environment that has been created to be as close to day-to-day living as you’re going to get.

So, what were the results?

Overall, Radbot achieved 60% energy savings on a per room basis.  For this particular home, it resulted in 25% whole-house savings as the living room was fitted with a lockshield valve, and therefore couldn’t be fitted with TRV.

The most notable highlight was that it performed particularly well in areas where there is a lot of ‘unpredictable’ activity, such as the bedrooms, bathroom and hallway.

As we tend to move in and out of bedrooms, bathrooms and hallways throughout the day – or not even use them at all – a solution like Radbot is perfect for spaces that have long periods of emptiness, or inactivity, and then sudden spikes of activity when it is occupied.

By automatically lowering the temperature in a space that is used less frequently – such as a bedroom – not only saves energy, but also the hassle of having to constantly adjust TRVs and managing the whole house heating manually.

Radbot reduces the risk of wasting heat by opening windows to cool an overheated room or having to whack-up the radiator temperature suddenly if it’s too cold. It also eliminates damp and mould issues that can occur when an empty room isn’t heated at all.

As mentioned at the beginning, we don’t believe in half measures. We wanted to really put Radbot to the test, which we have most definitely done in the Salford House.

Energy efficiency is something we are very passionate about.  We are eager to make sure we’re doing our bit for the environment, but with the added benefit of saving you money.

This website uses cookies to improve your experience while you navigate through the website. Out of these, the cookies that are categorized as necessary are stored on your browser as they are essential for the working of basic functionalities of the website. We also use third-party cookies that help us analyze and understand how you use this website. These cookies will be stored in your browser only with your consent. You also have the option to opt-out of these cookies. But opting out of some of these cookies may affect your browsing experience.
Necessary Always Enabled

Any cookies that may not be particularly necessary for the website to function and is used specifically to collect user personal data via analytics, ads, other embedded contents are termed as non-necessary cookies. It is mandatory to procure user consent prior to running these cookies on your website.