A major change to the way heat homes and building is needed, says CEO, Erin Ericson

Over the past two decades, the heating industry has gone through significant change. With the introduction of adjustable manual radiator valves and then the smart heating revolution with its app-based, programmable solutions like smart thermostats and connected TRVs, people now have an extensive choice of heating controls.

But despite many major brands like Honeywell and Nest competing in this market, a gap remains leaving the needs of many customers unmet. And this gap is costing households and businesses in Europe billions each year and contributing to ~20-25% of European CO2 emissions by heating properties inefficiently.

First brought to market in the seventies as a cheap and easy way of achieving room by room temperature control, TRVs are now a standard in most radiator-based heating systems (the most prevalent heating system in the UK & Europe).

This simple technology has enormous potential for improving energy efficiency hence why they are part of the UK Building Regulation Guidelines and in the majority of buildings.

Yet almost 60 years later most of us still refer to them as the “dial-thing that I never touch” meaning they aren’t serving the purpose for which they were invented – room by room temperature control that delivers improved energy efficiency.

Do you remember the last time you turned your TRVs down in a room you weren’t using?…me neither.

In the wake of the smart heating revolution spear-headed by smart thermostats, the industry started to wake up to this gap and corresponding commercial opportunity.  And the response?

Connected TRVs were born (also known as smart, programmable, eTRVs, or iTRVs).  Offering the potential for superior energy savings to its predecessor, the manual TRV, most manufacturers jumped on board in recent years by adding a connected TRV to its product portfolios.  Whilst a growing category, connected TRVs remain a very small sub-segment of this large established market.  But why?

Part of the problem is that connected TRVs are generally marketed and sold as part of a “smart home” or “smart heating” ecosystem, which is still less than 3% market penetration in Europe despite recent growth.  So it’s missing the major market opportunity of the estimated 1.2bn radiators in Europe and 70 million replacement valves sold each year.

Second, the ease of use just isn’t there: issues connecting to the hub, setting up an account, and of course, the big one…programming radiator by radiator-based schedules that accurately mimic your household’s occupancy patterns every day of the week.  It’s exhausting just thinking about.

As a result, the expected energy savings simply won’t be realised if these devices aren’t programmed correctly or programmed at all.  At a cost of £50-£100 per valve (excludes required extras like a hub or installation) that means the return on investment is too long for many, consequently slowing adoption.

It’s clear there is a need for a middle-ground solution that offers the best of both worlds in order to address this huge market gap.

Radbot combines the simplicity of traditional manual TRVs with the superior energy savings of connected TRVs, to deliver an industry leading payback as short as 1 year. 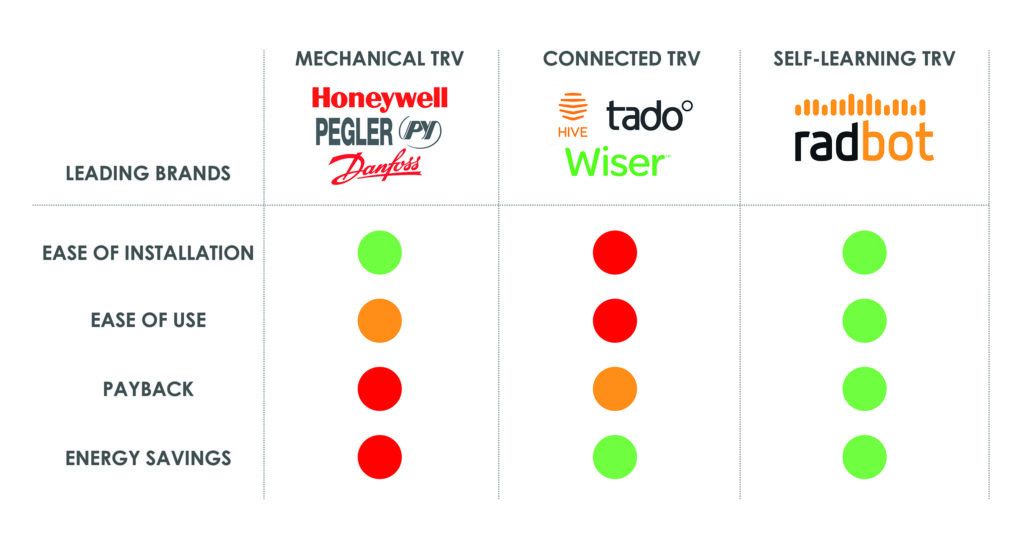 The key difference is that Radbot works automatically by using a sophisticated learning algorithm so that it knows when to heat each room based on occupancy patterns.

Radbot then heats each room when you’re there and reduces the temperature when you’re not.  The result is up to 30% energy savings, which for a typical UK home equates to an ROI of 12-24 months.

In fact, Radbot is one of the most cost-effective solutions compared to a broad range of other leading energy efficiency measures.  Based on expected lifetime savings over its cost, Radbot is second only to cavity wall insulation on cost-effectiveness.

What’s next for the heating industry?

Change and lots of it.

“Net Zero” is now a mainstream topic for governments, businesses, and consumers alike.  It’s well established that as one of the largest contributors to CO2 emissions, a major change is required to how we heat homes and buildings if we are to achieve this critical milestone.

While many exciting low-carbon technologies are in the pipeline, it will take decades to develop and deploy them cost-effectively and at scale.  In the meantime, we must fill the gap in our existing infrastructure.  If we don’t, we are all leaving money, energy, and carbon on the table.

Erin Ericson is CEO of Vestemi, a UK based technology company with an environmental and social purpose.

Vestemi is currently fundraising with investment partners, Greenbackers.  This investment round will support the company through its next stage of growth.

To learn more watch our company overview.
For more information on investing in Radbot, email: erin.ericson@vestemi.com